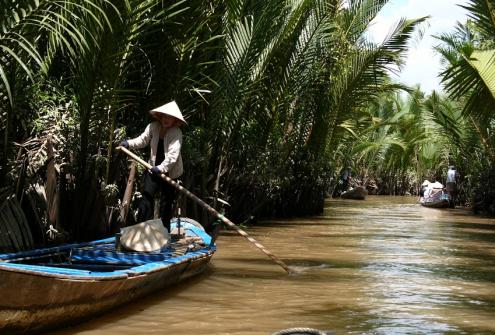 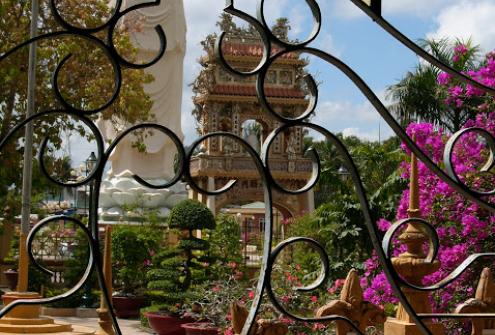 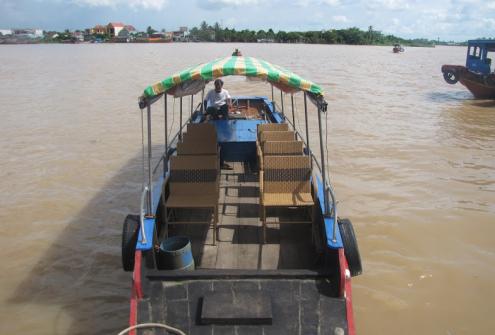 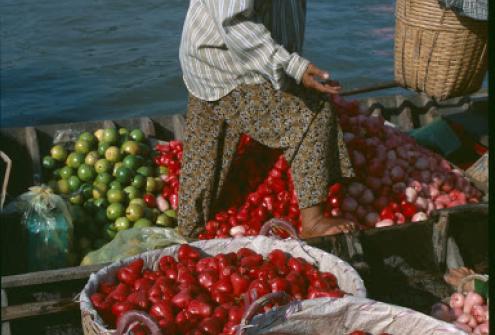 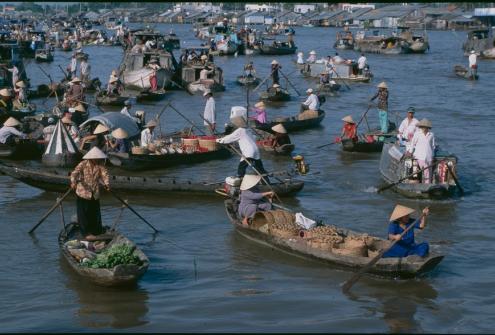 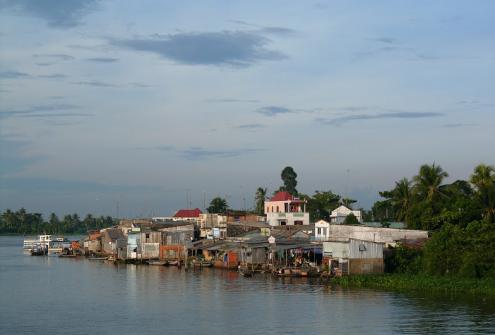 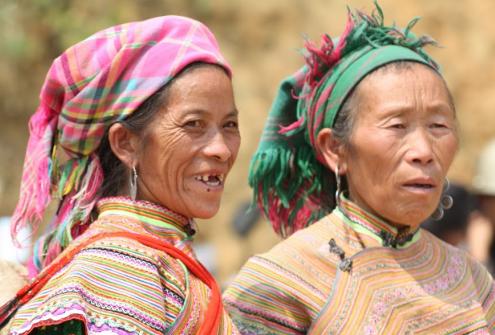 Touring the orchards, paddy fields and swamplands of the Mekong Delta, you could be forgiven for thinking you’ve stepped into the pages of a geography textbook. A comma-shaped flatland stretching from Ho Chi Minh’s city limits southwest to the Gulf of Thailand, the delta is Vietnam’s rice bowl, an agricultural miracle that pumps out more than a third of the country’s annual food crop from just ten percent of its total land mass. Rice may be the delta’s staple crop, but coconut palms, fruit orchards and sugar-cane groves also thrive in its nutrient-rich soil, and the sight of conical-hatted farmers tending their land is one of Vietnam’s most enduring images.

There are over a dozen towns in the delta with facilities for tourists, though some are rarely visited as they are not on the way to anywhere. My Tho is well geared up for boat trips, and near enough to Ho Chi Minh City to be seen on a day-trip: it affords an appetizing glimpse of the delta’s northernmost tributary, the Tien Giang. From My Tho, laidback Ben Tre and the bounteous fruit orchards besieging it are only a hop and a skip away. Cao Lanh is strictly for bird enthusiasts, but Sa Dec, with its timeless river scenes and riotously colourful flower nurseries, has a more universal appeal, while just down the road, Vinh Long is another jumping-off point for boat trips.

Many visitors spend a day or two in Can Tho, the delta’s biggest settlement, to take advantage of its decent hotels and restaurants and to recharge batteries before venturing out to the floating markets nearby. From Can Tho, there’s something to be said for dropping down to the foot of the delta, where the swampland that surrounds Ca Mau can be explored by boat, and Mui Ca Mau signals journey’s end in Vietnam. Pulling up, en route, at the Khmer stronghold of Soc Trang is especially rewarding if your trip coincides with the colourful Oc Om Bok festival (Nov or Dec), during which the local Khmer community takes to the river to stage spectacular longboat races. Northwest of Can Tho meanwhile, and a stone’s throw from the Cambodian border, is the ebullient town of Chau Doc, south of which Sam Mountain provides a welcome undulation in the surrounding plains. The opening of the border here has brought a steady stream of travellers going on to Phnom Penh by boat, and several of them rest up a few days here before leaving the country.

Ha Tien, a remote border town surrounded by Khmer villages, is the best place to hop on a boat to Phu Quoc. The town has also become popular for its international border crossing, which allows beach bums to slide along the coast from Phu Quoc Island to Sihanoukville in Cambodia or vice versa.

Given its seasonal flooding, the best time to visit the delta is, predictably enough, in the dry season, which runs from December to May.