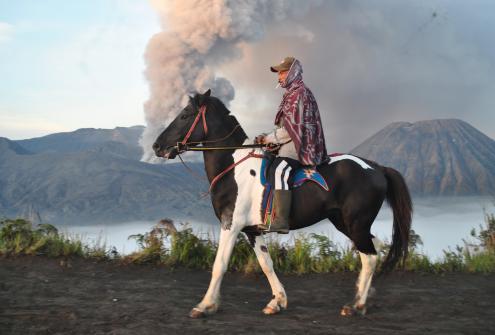 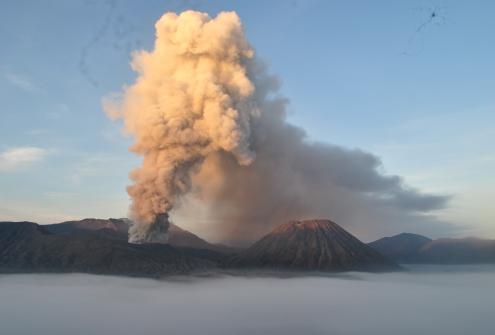 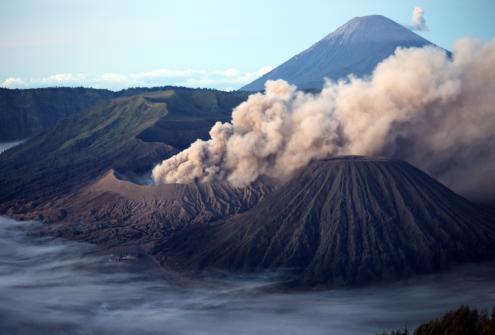 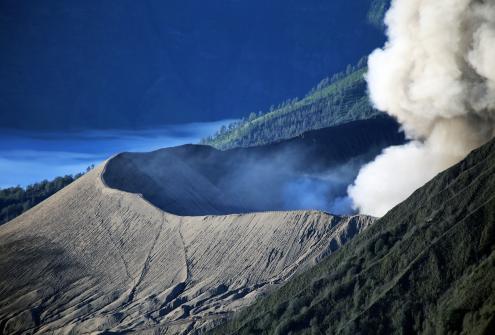 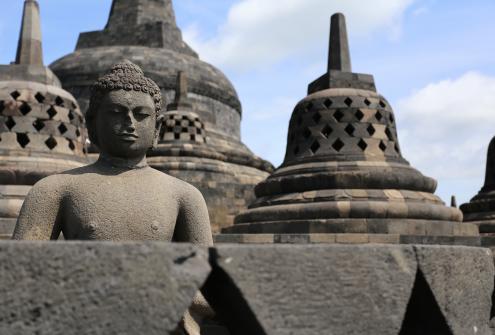 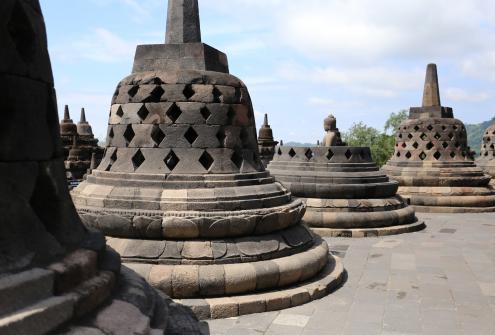 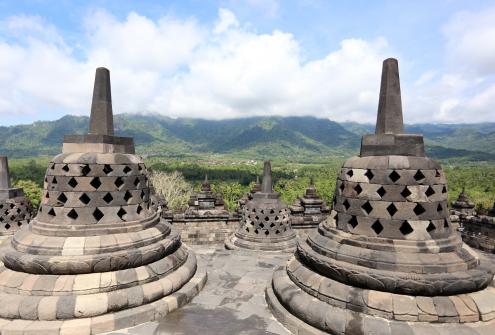 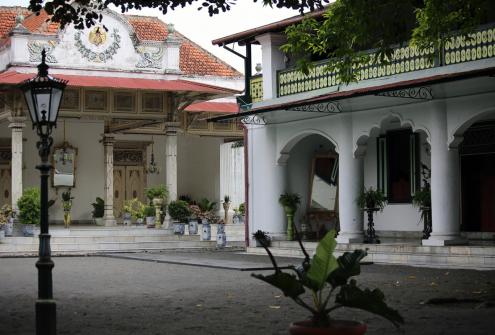 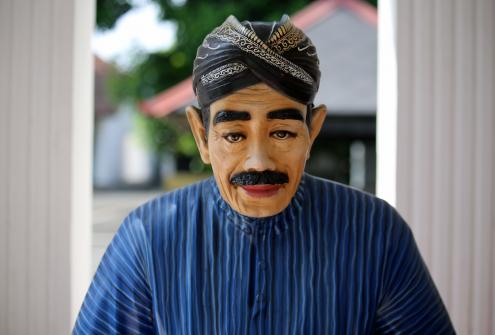 The heart of the nation, Java is an island of megacities, mesmerising natural beauty, magical archaeological sites and profound traditions in art, music and dance.
Boasting a dazzling array of bewitching landscapes – iridescent rice paddies, smoking volcanoes, rainforest and savannah, not to mention virgin beaches – most journeys here are defined by scenic excesses. The island is at its most excessive in the cities: crowded, polluted, concrete labyrinths that buzz and roar. Dive into Jakarta's addictive mayhem, soak up Yogyakarta's soul and stroll though Solo's batik laneways en route to the island's all-natural wonders.

Home to 140 million people and the most populated island on earth, Java travel can be slow going, particularly in the west. However, the rail network is generally reliable and efficient, and flights are inexpensive. Your endurance will be rewarded with fascinating insights into Indonesia's most complex and culturally compelling island.

Bounded to the north by the Java Sea and the south by the low Bogor Hills, Indonesia’s overwhelming capital, Jakarta, has long been the focus of the country’s changing political face, most dramatically with the student-led demonstrations against Suharto in 1998. Indonesia’s most populous city, it has grown from 900,000 inhabitants in 1945 to well over thirteen million (and more than twenty million if you take into account the greater urban region known as Jabotabek). Emblematic of the nation’s most striking contrasts, the capital sprawls over 661 square kilometres of northern Java in an amalgam of glamorous shopping malls, colonial-era relics, upscale neighbourhoods and slums spread beneath a soaring skyline. While few foreign visitors find the city as alluring as the local population does, there is no better place to glimpse the modern face of Indonesia. Among the city’s highlights are Kota in the north, the former heart of the old Dutch city, and the neighbouring Sunda Kelapa, Jakarta’s bustling old port. Both districts are dotted with historic buildings, including a few of the country’s finest museums, among them the Maritime Museum, the Wayang Museum and the National Museum.

To head from north to south through the centre of Jakarta is to go forward in time, from the quaint old Dutch area of Kota in the north, to the modern golf courses and amusement parks in the south. Medan Merdeka, a giant, threadbare patch of grass, marks the spiritual centre of Jakarta, if not exactly its geographical one, bordered to the west by the city’s major north–south thoroughfare. The main commercial district and the budget accommodation enclave of Jalan Jaksa lie just a short distance to the south of Medan Merdeka.

The Bromo region is best known for its awesome scenery; at its heart is a vast, ancient volcanic crater with sheer walls over 300m high. Within this crater, a host of picturesque mountains, including the dramatic, still-smoking Gunung Bromo (2329m), rises up from the Sea of Sand, the sandy plain at the crater’s base. Hundreds of thousands of visitors come here each year to climb Bromo for the sunrise – a stunning sight, and less strenuous than many other Indonesian peaks.

This unique landscape now comprises the Bromo-Tengger-Semeru National Park, whose highlights are the dramatic smoking crater of Gunung Bromo, Gunung Penanjakan – on the outside crater’s edge and one of the favourite sunrise spots – and Cemoro Lawang, with its brilliant panoramic view of the crater. The park also contains the highest mountain in Java, Gunung Semeru, which can be climbed by experienced trekkers. Views are best in the dry season but, whatever time of year, you should bring warm clothes.

There are two main approaches to the Bromo region. The most popular is to head inland from Probolinggo, on the north coast, to the crater’s edge at Cemoro Lawang, where most people stay in order to make the dawn trip to Gunung Bromo as easy as possible. Alternative access is from Pasuruan, also on the north coast, inland to the less-visited villages of Tosari and Wonokitri. These villages are linked by road to Gunung Penanjakan, so they offer an excellent approach for the sunrise. Many people visit Bromo as part of an organized trip from Yogya to Bali.

Forty kilometres west of Yogya, surrounded on three sides by volcanoes and on the fourth by jagged limestone cliffs, is the largest Buddhist monument in the southern hemisphere. This is the temple of Borobudur, the greatest single piece of classical architecture in the entire archipelago. The temple is actually a colossal multi-tiered Buddhist stupa lying at the western end of a four-kilometre-long chain of temples (one of which, the nearby Candi Mendut, is also worth visiting), built in the ninth century by the Saliendra dynasty. At 34.5m tall, however, and covering an area of some 200 square metres, Borobudur is on a different scale altogether, dwarfing all the other candi in the chain. Abandoned and neglected for almost a thousand years, Borobudur was “rediscovered” by the English in 1815, though nothing much was done until 1973, when UNESCO began to take the temple apart, block by block, in order to replace the waterlogged hill with a concrete substitute.

Yogyakarta ranks as one of the best-preserved and most attractive cities in Java, and is a major centre for the classical Javanese arts of batik, ballet, drama, music, poetry and puppet shows. It is also the perfect base from which to explore the temples of Borobudur and Prambanan, or take an early morning hike up Gunung Merapi. Tourists flock here, attracted not only by the city’s courtly splendour but also by the cuisine and shopping, and the various language and cultural courses on offer. As a result there are more tourist-oriented hotels in Yogya than anywhere else in Java and, unfortunately, a correspondingly high number of touts, pickpockets and con-artists.

Sultan Hamengkubuwono I (also known as Mangkubumi) established his court here in 1755, spending the next 37 years building the new capital, with the Kraton as the centrepiece and the court at Solo as the blueprint. In 1946, the capital of the newly declared Republic of Indonesia was moved to Yogya from Jakarta, and the Kraton became the unofficial headquarters for the republican movement. The royal household of Yogya continues to enjoy almost slavish devotion from its subjects and the current sultan, Hamengkubuwono X, remains an influential politician.